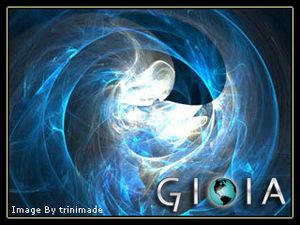 Too often do we neglect or take for granted the artistic skills and talents that can touch or inspire many people, but for Gioia (pronounced ‘joy-ah’), his final realization came as the result of a dramatic, near-death experience. Hailing from the historic ‘North End’ of Boston, Massachusetts, Gioia grew up as the product of an Italian family centered on strong cultural values and an exemplary work ethic towards all endeavors. “I was always taught that nothing would be handed to me,” recalls Gioia. “So if I wanted anything in life, it was up to me to make it happen.”

Gioia was involved in singing at a young age and then, at the age of twelve, he attended a sold out concert by the world famous rock group ‘Kiss.’ At that moment, he recalls enthusiastically “I was hooked!” Gioia continues, “ I remember it clear as day; the lights, the fire, the elevating stage, the crazy, screaming fans, the costumes....for me, that was it. I knew EXACTLY what I wanted to be when I grew up... A ROCKSTAR!”

After staying involved with music throughout college, performing in various on-campus shows and graduating, Gioia landed a job at Club Med as a scuba instructor and vocal performer. After a few months, he then relocated to Orlando where he hoped to launch his career as a pop star. He worked as a waiter and recorded a demo of pop dance music. Gioia was hell bent on succeeding, and being very aggressive with his music career he invested thousands of dollars into a business deal that his producer was undertaking to launch an indie record label. Unfortunately, the deal turned out to be a scam and the producers lending partner was arrested by the FBI for fraud. At that point Gioia recalls, “I was very disappointed and jaded. I just had my life savings stolen from me with no possibility of recouping it. I was broke, my friends were pursuing reliable careers, and my parents were telling me to ‘get a real job.’ Without being able to play a musical instrument, I had reached a dead end and my passion for singing was wavering. So I caved in to all the surrounding circumstances and made the commitment to a full time professional job as a restaurant training manager.”

As Gioia’s professional life and family became his top priority, the idea of pursuing a successful music career eventually faded away; until one night when the unexpected happened. As Gioia was driving home from a late night of work, he began to doze off and got into an accident, flipping his car over seven times. At the crash scene as Gioia fought to hold on to his life, Gioia claims to have experienced a supportive spiritual presence, an "angel" he states. He later spent 3 days on life support with bleeding lungs and a bruised heart. It was touch and go for many weeks as a slow healing took place. In the end, the entire event was a wake-up call for Gioia to be grateful for his life, but it also reignited his gift of music from within, inspiring him to write the song “Angel on your Shoulder”. Gioia had now come full circle.

Influenced by artists such as U2, Madonna, Rod Stewart, Justin Timberlake, Rihanna, and Lady Gaga, Gioia bridges modern pop and dance music. Currently, Gioia is wrapping up his sophomore album entitled Flawless (scheduled to be released in winter of 2010). This album reflects all of his musical influences through a dance-pop sound, which is also fused together with various other modern genres and a range of various subject matters which personally affect his life on a direct and also indirect level. These topics range with everything from life, death, the environment, and an underlying love toward humanity with a sense of global unity that exists beyond distinctions of race, color, or creed.

Flawless consists of powerful songs such as “The Fire Rages On,” which speaks to the burning of the rainforest while challenging people to be environmentally responsible and accountable. “I’m big on environmental care, and the track reflects about the current state of the environment, the need for global awareness, and also the need for conservationist changes.” Another substantial track, “Love Is All We’ll Know” makes the statement that our true nature as human beings is solely to love one another. And on his most personal song, “Angel on your Shoulder,” Gioia delivers an emotional and inspiring vocal performance channeling all he’s experienced about love, life and nearing death on that faithful night and beyond. “When recording those vocals, I reconnected to those loved ones, including myself, who battled through life and death struggles, some of those who have survived and some of those who didn’t. I hope the song inspires those of us who have had or know people dealing with their own life-and-death struggles, to stay hopeful and strive toward positive outcomes.” Of course there are also plenty of songs to dance to and get excited about; from “Real”, to “Angel Child”, to “Turn U Out” with each song painting a vivid picture in the listener’s mind through Gioia’s considerable lyrics, colorful vocal arrangements and infectious production.

With production done entirely by Marc Soucy of AudioMusicVoice (El Kapitan and David Hull - bassist for Buddy Miles, The Joe Perry Project, rock trio Fahrenheit, James Montgomery, and live fill in for Aerosmith), and Surefire Music Group (MTV's Making of the Band featured artist - Makio, MTV's featured artist - Brooke Hogan and River Dance lead singer - Hayley Griffiths), Flawless will stand as a work of art crossing various genres through originality of instrumentation, lyrics, and a number of personal experiences. “With each song, I aim to create something more than music. I want listeners to be able to envision what the song is about while also being emotionally moved and inspired. Whether they understand the message that I am trying to share with or they develop their own understanding, I want everyone to be able to enjoy and develop a connection to my music.”

Since ‘Gioia’ means “joy or jewel” in Italian, then it is only right that Gioia’s listeners should expect to take away jewels of hope, positivity, and unity from his music.